Wow! It’s been longer than I thought since I’ve left any updates. What a busy, busy time it’s been.

First, I am going to be perfectly honest and say I have not done any Pilates or any other sort of exercise since I last posted. I’m quite a bit disappointed in myself 😦 I won’t let it get me down though. Never quit trying!

This is not to say I haven’t been busy, or even that I haven’t gotten physical activity. I will leave the majority of my gardening adventures for another post though. I want to get the pictures uploaded first. I will say that last Wednesday (the day I did the majority of my gardening) I got quite the sunburn on my back. It was about 80 degrees! Yay! But I wasn’t as careful as I thought I was being.

What I’d like to talk about instead is my oldest boy, Josh. He just finished up his first year of college and my husband and I went up north to pick him up and move him home. In case you missed it in a previous post, Josh goes to school in state but as far away as he could possibly get while staying in Michigan. We live in the Metro Detroit area and he goes to school in Houghton, which is in the Upper Peninsula way over on the west side and the tippy top. 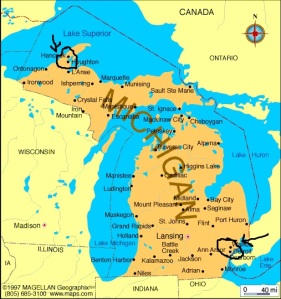 See?  We’re the circle at the bottom and he’s the circle at the top.  Almost as far as he could have gotten.  It’s about 550 miles away and takes anywhere from 9 1/2 to 12 hours to drive one way…depending on traffic and weather.

Herbie and I set off on Thursday morning, bright and early after getting Griffin off to school. (Our nephew Nathan was staying with him that night and getting him off to school in the morning for us.)  It was a beautiful day!  Sunny, blue skies.  The weatherman said it was going to be as nice as Wednesday, low 80s again!  Great weather for a trip.

Reading the book club selection on my Kindle in the car…note the Tardis socks.

It was interesting to keep tabs of the outside temperature on my car dashboard.  First it started going up as the world started waking up more and more.  We were even in the 70s at one point.  Then we started getting toward the upper part of the Lower Peninsula and I saw some pockets of unmelted snow.  That temperature gauge slowly started falling back down and it was just early afternoon.  Before we knew it we were in the low 30s and in sleet.  I was definitely glad hubs was driving at this point.

Once the slippery ice was in the past and we were just dealing with plain snow, I couldn’t resist some pictures.  Yes, snow in May sucks.  But it’s just so pretty! 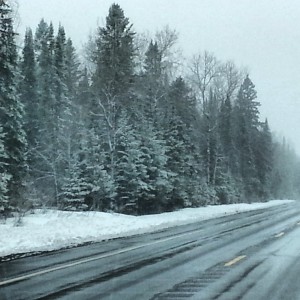 It was very strange to be in the blowing snow as my back was radiating heat from my burn.

Surprisingly, it didn’t really slow us up too much since the first 8 hours of the trip were clear roads.  We got into town, checked into our hotel and arrived at Josh’s dorm all before 6 o’clock.

We packed a few things into the car but saved most of the big stuff for the morning.  Josh had a 9am room inspection time so we could get on the road before it got too late.  So we went out for a quick dinner and called it a night.

Kind of sucks to wake up to iced up windows and car doors frozen shut in May, but at least it was only for one night.  It started snowing while just after we got back to Josh’s dorm, which meant the rest of the car packing up was done in a nice wet snow.  Oh joy!  At least I didn’t have to carry his dorm fridge down two flights of stairs.  That’s one of the reasons I have a husband 😉  But still, we got done with that even sooner than expected also so Josh went to speak with his RA to see if he could do his inspection earlier.

All went well and we were gassed up and on the road by 9 o’clock.  Then we watched the temperature gauge do the opposite of the day before.  We drove through some snow and sleet for a couple of hours, but then it cleared up and got warmer and warmer the closer to home we got.

This is the only picture I got of Josh while driving because he is amazing and can instantly fall asleep on any car trip.  So he was up for all of 5 minutes, and probably that long only because I was talking to him a lot.

I adore that grizzly face!

We are now all home safe and sound and all is right in my world again.  Now for the readjustment to having him living here again.  I can deal with it.  I mean, I’m sure you all understand that I actually love it.  But the little brother…that’s another story.

Ahhh, how I missed the sounds of teasing and arguing!

I'm the mom of two boys and wife to my high school sweetheart. Our oldest, Josh, is living at home while working and paying off student loans. Our youngest, Griffin recently left his active duty Army job and is now National Guard here at home. He moved back to Michigan with his wife Kirsten and our beautiful granddaughter Hazel. I work part time and try to fit as much reading into my life as possible.
View all posts by Cheri →
This entry was posted in Procrastinators Progress and tagged college, family, kids, motherhood, MTU. Bookmark the permalink.