Back in April I told you I would post my review for my book club pick. I may not have been around much since then, but I keep my promises!

It’s a busy time of year for everyone, so we had a small showing this month for book club. It was just my sister Gina, my mom, my Aunt Lynne and our friend Tina. Everyone else had soccer, grad parties, etc. We were still able to have quite a good discussion though.
This month’s book was Eighty Days: Nellie Bly and Elizabeth Bisland’s History-Making Race Around the World by Matthew Goodman. 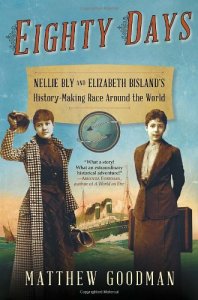 First, I’ll give you a quick synopsis of the story and my take on the book. Then we’ll get into what all the other ladies had to say.

Nellie Bly and Elisabeth Bisland were real women living at the end of the 19th century. Both writers, both journalists, both very different personalities from one another. Nellie worked for one of the largest newspapers in New York, The World. Elisabeth worked for a monthly periodical (aka magazine), The Cosmopolitan. Nellie had been urging her editor to allow her to go around the world and try to beat the fictional Phileas Fogg’s record of 80 days. Leading up to her trip there wasn’t a whole lot of news on her plans so the editor of The Cosmopolitan didn’t learn of it until the day she was leaving. He decided his reporter Elizabeth could beat Nellie by heading out in the opposite direction and it would be great publicity for his magazine. So, poor Elizabeth had to leave New York on a moment’s notice, only about 7 hours after hearing of the trip. This book is about the issues they ran into along the way, how they viewed the world, and how the world viewed them.

Nellie Bly in her traveling outfit

Let me start by saying I really, really, really wanted to like this book. Some aspects of the story I really enjoyed. Unfortunately, others just fell flat. All of us in book club were surprised that we had never heard anything about this in history class. Is it because they were women? We never came to a consensus about that. We know that it was a really big deal at the time and did much to banish some stereotypes of women in those times. For instance, nobody thought the women could do it because most thought a woman could not go on such a trip without at least 10 steamer trunks. Not to mention the fact that women at the time did not travel without a chaperone. Well, they both traveled light and alone. It wasn’t the story itself that I didn’t enjoy, it was the rambling. I am a history junkie. I usually gobble up all factoids and stories of yesteryear. But Matthew Goodman put so many factoids into this book that it took away from the heart of the tale. I’m not going to say it was his writing style, when the snippets weren’t there I really enjoyed his style. I am of the opinion that he needed an editor that wasn’t afraid to cut. I’m talking addresses people. The author felt in necessary to tell us every address and intersection they ladies passed by while in New York City. Unless you’re a New Yorker or have spent ample time in New York, odds are you don’t care and it certainly doesn’t add to the story.

I started this book with a love for both women, plucky Nellie Bly and reserved Elisabeth Bisland. In fact, I started off favoring Bly a little. By the end I couldn’t stand the woman and was rooting for Elizabeth to make it to New York first. I’m not going to tell you how it ends or who wins because I do feel it is a book worth reading. By the end I viewed Nellie as a self-centered, racist, lying you-know-what and Elizabeth as a strong, brave, humble woman who any mom would feel safe to have her daughter look up to. Even for the times they were living in, Nellie was very unforgiving of different cultures. 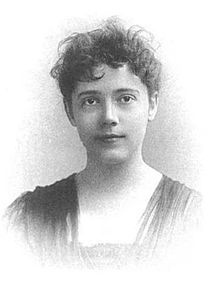 As for the other ladies in book club, they enjoyed it far more than I did. Like I said, I think it is worth reading. It just was not an easy read for me due to the extra facts and figures. They also had problems with Nellie and her personality but loved Elisabeth. And we all agreed that both women, no matter their personalities, did a lot to push women’s rights forward.

Let me know if you’ve read this book and what you thought. Or if you’ve ever learned anything about either lady in school or elsewhere. I’d love to know.
Finally, my mom is the next book club host. We haven’t picked a date or even a book yet. We tend to skip summer months because everyone is just so busy. I’ll let you know.

On a personal reading note, I recently finished the first two books of the “His Fair Assassin” trilogy. Book three doesn’t come out until next year  I loved these books and will do a post on them soon.

I'm the mom of two boys and wife to my high school sweetheart. Our oldest, Josh, is living at home while working and paying off student loans. Our youngest, Griffin recently left his active duty Army job and is now National Guard here at home. He moved back to Michigan with his wife Kirsten and our beautiful granddaughter Hazel. I work part time and try to fit as much reading into my life as possible.
View all posts by Cheri →
This entry was posted in Procrastinators Progress and tagged 2 stars, biography, book club, book review, Eighty Days, Elizabeth Bisland, His Fair Assassin, history, Matthew Goodman, Nellie Bly, Race Around World, Woman's Lib. Bookmark the permalink.