I’m not sure why, but I’ve been on a pickling kick lately.  I’ve also been trying to learn more about my camera and take some pictures of my food/cooking.  I’m sure the camera part of this will take time…I’ll get better little by little.

So I’ve been saving some recipes up that I’ve photographed.  I’ll get them posted, hopefully a recipe a week.  I’m not making any promises though.  You know how good I am at putting things off until the elusive “later”.

This particular recipe comes from my husband’s Aunt Pat who lives in the Upper Peninsula.  Michiganders love to can and pickle things for our looooong winters.  I think Yoopers like pickling more than any other area in America.  Their winters are easily two months longer than the winters down-state.

I made these Cocktail Dill Tomatoes a little over two weeks ago.  They’re supposed to age for at least two weeks so I wanted to make sure they turned out okay before I posted the recipe.  I’ve had them numerous times, but had never made them myself.  I’m happy to report that they are delicious!  Griffin really likes them, too.  So far we’ve just eaten them right out of the jar, popping them in our mouths like candy.  I imagine they’d be a great side for a sandwich, like a pickle.  If I was more of a drinker I’d probably try them in place of an olive in a martini.  I’d love to hear your ideas.

The tomatoes have been soaking in the water overnight.  I honestly don’t know why, but it was in the recipe so I did what I was told (for once).  Also, this recipe technically calls for green cherry tomatoes, which I didn’t have.  I blinked and my tomatoes all ripened.  I only planted one tomato plant this year so I raided my brothers’ garden.  He had a larger variety, but since I wanted about 4 cups of tomatoes I used various types and sizes.  Luckily, this worked out fine.  So don’t be afraid to use whatever you have.

Add one clove of garlic, 6 whole peppercorns, 1/8 tsp. alum, one head of dill, and one hot red pepper.  (The instructions say to use half a red pepper if using pint jars, but I used whole since we like things on the spicy side at my house.)

I love all of the colors…like Christmas!  (Sorry, it’s never too early for me to be humming Christmas carols.  Drives my family NUTS!)

Now stuff those tomatoes into the jars.  All the way to the top, fit as many in there as you can. 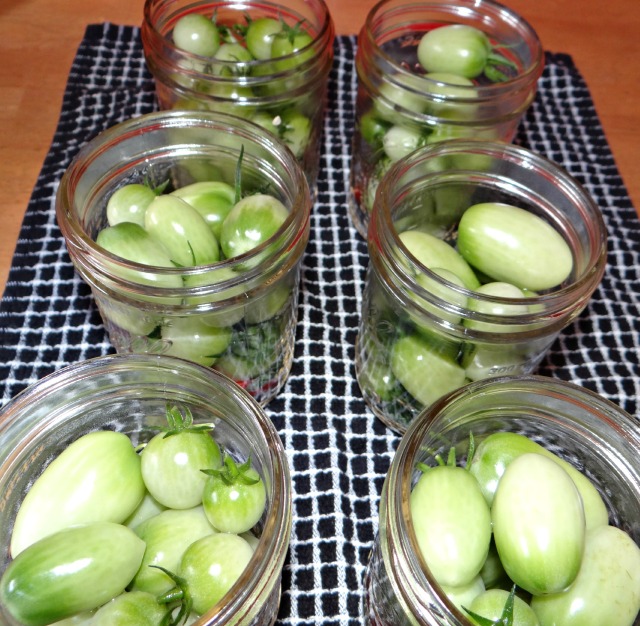 Don’t worry about the little stems, that just makes them easier to pull out of the jar when they’re done 🙂

Now you want to combine one quart (4 cups) of the cider vinegar, one cup of salt and 3 quarts (12 cups) of water to a large pot.  Bring to a boil and pour over the tomatoes in each jar.

I found the easiest way for me to do this was to pour the brine mixture into a spouted liquid measure.  Make sure whatever you use can handle the heat of the boiling brine and preferably should be glass, that way it doesn’t  interact with the ingredients in the brine.  Fill each jar to the top.

Pour the brine back into the jars and top each one with a bay leaf.  Seal the jars immediately.  As they cool you’ll hear that cool “pop” and know that your jars are sealed.  Let them age for at least 2 weeks but use within 6 months.  Refrigerate after opening.

As you can see, I didn’t put enough tomatoes in my jars.  I think the different sizes made them harder to cram into the jars, too.  But they still taste yummy!

Now I have no idea how to do that recipe card thing some bloggers do…sorry.  But below is the recipe. 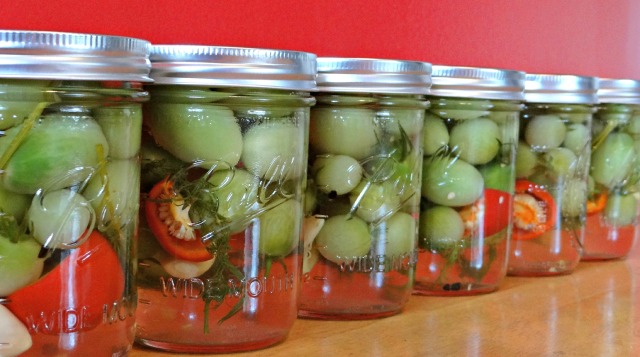 Enough small green tomatoes to fill your jars.  (As I said previously, I used pint sized jars and I used about 4 or 5 cups of tomatoes.)

Wash tomatoes, cover with cold water and allow to stand in refrigerator overnight.

Allow to age for at least 2 weeks before using.  Chill before serving.  These should keep on the shelf for about 6 months.

I'm the mom of two boys and wife to my high school sweetheart. Our oldest, Josh, is living at home while working and paying off student loans. Our youngest, Griffin recently left his active duty Army job and is now National Guard here at home. He moved back to Michigan with his wife Kirsten and our beautiful granddaughter Hazel. I work part time and try to fit as much reading into my life as possible.
View all posts by Cheri →
This entry was posted in Procrastinators Progress and tagged canning, cocktail dill tomatoes, cooking, food, green tomatoes, pickling, tomatoes, vegetarian. Bookmark the permalink.