I know I promised a more all-encompassing Olympic post, but I decided to wait until the end and do a wrap-up.  After all, there is less than a week before the closing ceremonies.  Instead, I’m bringing you the quintessential Olympic moment.  That moment that happens in every Olympic games that reminds us what they are truly about.  I’m not talking about the great moments like the Miracle on Ice in 1980.  I’m talking about the agony of defeat moments.  The moments that happen in the blink of an eye and can take the favorite from the front position to the back.  The moments that humanity’s will to fight rears its head and doesn’t let an athlete give up, even when the odds are stacked against them.  Although there are quite a few days left of these games, I’m going to go out on a limb and say nothing will surpass this Olympic moment in the 2014 Sochi games.

On Tuesday, February 11 the cross-country skiing men’s sprint free semi-finals were taking place.  The first heat of this 1.5 km race (with hills and curves) included Russian Anton Gafarov.  About a minute and a half into this race that usually takes less than 4 minutes, Gafarov fell.  At an event where there are cameras from every angle, somehow we never get a clear picture of what exactly happened.

Regardless, he’s down with a ski that looks to be broken.  He lays there only a short time before struggling back to his feet and continuing the race.  At this point it is virtually impossible for him to finish anything but last.  Everyone else would have to wipe out for him to even think about qualifying through to the next round.  And remember, he has a broken ski!  But this is a man in his home country who is here to compete…to make his country proud.  By now, the tears are streaming down my cheeks.  I don’t care what country he is from, I am so damn proud of this man.  He’s on the final hill into the stadium when he falls again, his ski is now basically in shreds. Yet again, he gets up and keeps heading for the finish line.

Out from the sidelines comes a man with another ski.  He kneels down in the snow next to Gafarov and replaces his ski for him. 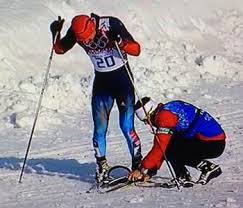 With that, Gafarov finishes the race more than 2 minutes slower than the rest of the competitors.  It just doesn’t matter…the crowd is cheering, they’re on their feet.  He is not slinking off the track just because he knows he’s now out of the running.  He came to cross that finish line and, damn it, he’s going to do that. It was one of the most inspiring things I have ever seen.  Those tears that started as a slow drip are now flowing like Niagara Falls as I sob. 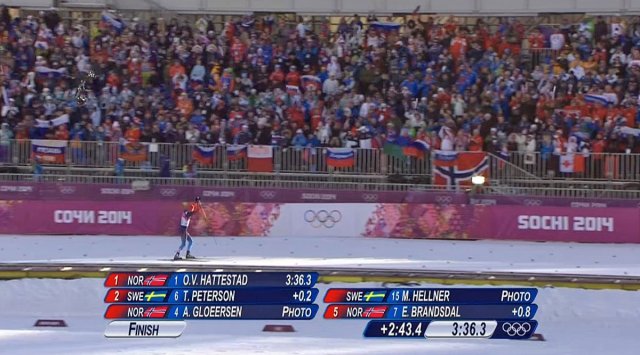 We later find out the mystery ski replacer was the coach of the Canadian team, Justin Wadsworth.  And wait until you hear his story.

Believe it or not he has a direct connection to another Olympic moment that happened eight years ago at the 2006 Turin Olympics.  I guess he believes in paying it back.

During the team sprint (think relay race), Canadian Sara Renner ended up with a broken ski pole.  If you know anything about cross-country skiing, you know the pole is kind of important.  This is during the second leg of a four leg race.  If she were to lose too much time it would make it impossible for her teammates who were following her to catch up.  Out of the sidelines comes a man carrying a ski pole to give to Renner.  The Canadians would go on to win a silver medal in the event.  The man with the pole?  Norwegian coach Bjornar Hakensmoen.  The Norwegians finish fourth in the event.  Fourth.  Yes, fourth.  One less than third.  One place out of being on the podium.

So, what has this to do with Justin Wadsworth?  His wife, Beckie Scott, was a part of the Canadian team.  Without that pole, his wife would most likely not have that silver medal.

Every swim meet I go to I am so proud when I see the interaction of the athletes.  My boys have both played different sports up until high school, when they both decided to only do swimming.  Between the two of them I’ve been to football, basketball and baseball games.  I’ve gone to support our school at soccer, volleyball and wrestling tournaments.  Never do I see the respect and sportsmanship at those events that I see at a swim meet.  Not to say the kids involved in those sports are not good kids.  I know a great many of them and most of them are wonderful.  There’s something about the swim kids’ interaction with “rivals” that is different though.  But let’s face it, these are high school kids.  It’s easy to be friendly to your rival when your career is not hinging on the results.  Yet there is nothing that says sportsmanship to me like respect and help amongst the athletes.  There’s nothing like that Olympic moment.

What has been a stand out Olympic moment for you?

I'm the mom of two boys and wife to my high school sweetheart. Our oldest, Josh, is living at home while working and paying off student loans. Our youngest, Griffin recently left his active duty Army job and is now National Guard here at home. He moved back to Michigan with his wife Kirsten and our beautiful granddaughter Hazel. I work part time and try to fit as much reading into my life as possible.
View all posts by Cheri →
This entry was posted in Procrastinators Progress and tagged athletes, Bjornar Hakensmoen, Canada, cross-country skiing, Olympic moment, Russia. Bookmark the permalink.

1 Response to A True Olympic Moment