In my What I’m Watching series I told you I would try to come back and give you some updates on the new shows that we were giving a try this year. It’s very unfortunate that the first real review is a bad one.

I tried. I promise I really, really tried.  In fact, I will try one more episode before totally writing it off (Herb refused to watch after the pilot).  Mulaney is just painful to watch.

What I find interesting is that I was afraid of Martin Short’s personality being too big and therefore would have the strong possibility of overpowering the other actors. Being a huge Martin Short fan I am happy to report that he ended up being the only good thing about the show.

When the pilot episode started with John Mulaney doing a comedic monologue ala Seinfeld we actually had high hopes. It was a funny bit that had us both laughing.  And then the “acting” started.  Let’s face it, some (possibly most) comics and comic writers just aren’t meant to be actors.  Just because Tina Fey, Amy Pohler and yes, Seinfeld can do it doesn’t mean everyone can.   Now, if I’m going to lay it all out on the table I’m going to admit that I always thought Jerry Seinfeld was an awful actor.  He had a stellar cast backing him up though so it could be forgiven. 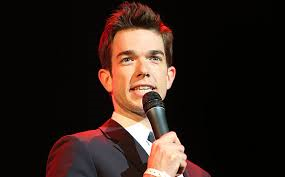 One of the aspects of this show that hurts me the most is what they have done to Elliott Gould. I am a huge fan and am appalled that they turned him into some caricature of a gay older man.  Listen, I have nothing against gay men or older men.  What I have a problem with is the over the top dialogue and situations they are throwing him into when, so far, he only has approximately 1 minute of airtime per episode.  It’s my belief Mr. Gould could play an awesome gay, older, quirky neighbor without it being uncomfortable.  The scenes he’s been given so far make it uncomfortable…and not in a good way.

The character of John Mulaney has two roommates played by comic Seaton Smith and comedienne Nasim Pedrad. (Note: I think of a comic as someone who is more of a standup routine and/or writer type of person and a comedian/comedienne as more of an actor who does primarily comedy shows/movies.  Example:  Jerry Seinfeld – comic, Steve Carell – comedian, Tina Fey – comic, Zooey Deschanel – comedienne.)  Pedrad’s acting isn’t terrible, but she is playing off of two guys who are very obviously uncomfortable in front of the camera.  Smith often looks to me like a deer in the headlights.   As for Mulaney, I feel like he has on an earpiece and is reciting what is being said to him.  Or he’s reading ALL of his lines off cue cards.  He is just so stiff and uncomfortable.  I can’t forget Zack Pearlman whose character Andre is basically treated like crap by the other characters.  I haven’t yet figured out what his purpose is in the show.  Friend?  Neighbor?  Creepy stalker?  At least his acting isn’t painful to watch. 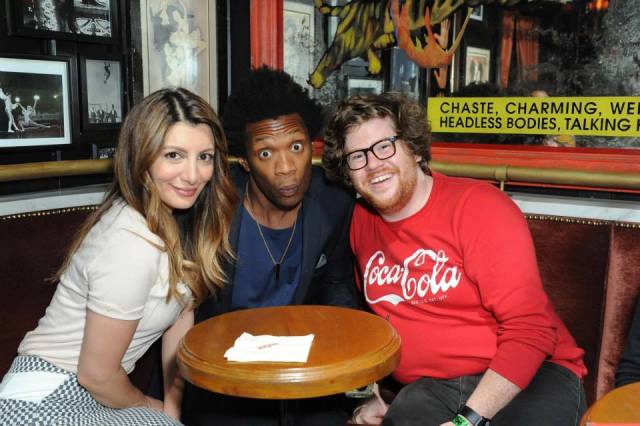 I can’t say if I’d like the show if the acting was better. There are some things I obviously don’t like (see above re: Gould), but it seems like the dialogue and premise aren’t too bad.  I just feel so uncomfortable watching the actors struggle that I can’t enjoy the show.  Even the extras seem uncomfortable!  In the second episode they had Fortune Feimster (another comic) playing a small role and it was just painful.  I was literally cringing.

I mentioned in the beginning that Martin Short ended up being the only good thing in the show. Of course, he’s playing a character that is inappropriate and a bit over the top.  But his acting is seemless.  I don’t feel as if he’s putting on a show at all.  In fact, by Martin Short standards, he’s character is quite calm.  He is the reason I will give it one more try. I’m afraid it doesn’t look it will be a keeper though.

Before I wrap this up, I want to stress that as individuals the cast has an impressive resume. Even without taking Short and Gould into consideration.  I’m sure I’d love to watch any show Mulaney or Smith write.  I’d be interested to see Pedrad in a different vehicle that would play to her strengths and where she didn’t have to be the strongest player on the stage.  Maybe something written by Fey or Pohler.  And for goodness sake, I never want to see Gould in such an embarrassing situation again.  He’s so much better than that.

Have you watched Mulaney? What do you think?  Am I being to harsh?

I'm the mom of two boys and wife to my high school sweetheart. Our oldest, Josh, is 26 and living at home while working and paying off student loans. Our youngest, Griffin, is 22 and recently got out of the Army and moved back to Michigan with his wife Kirsten and our beautiful granddaughter Hazel. I was lucky enough to have the option of leaving the full-time work force a some years ago. At this time, I babysit Hazel a few hours a day and get in as much reading and baking as possible.
View all posts by Cheri →
This entry was posted in Procrastinators Progress and tagged Elliott Gould, Fortune Feimster, John Mulaney, Martin Short, Mulaney, Nasim Pedrad, Seaton Smith, Zack Pearlman. Bookmark the permalink.