I am faced with the almost impossible task of writing a review of this stellar book without spoilers.  I detest spoilers and will not do that to others.  But let me tell you, there is so much going on in this book yet Nicole Edwards keeps everything perfectly on track.  And the secret Roan has?  It’s a doozy!

Somehow, I now have a third couple in the running for favorite in the Nicole Edwards universe.  For a long time I didn’t think anyone could beat Ethan & Beau…then I read Speechless and got to know Teague & Hudson.  Who knew Seg & Roan would give them all a run for their money.  Holy cow!  These two give me all the feels!  I by turns had chills, butterflies, tears, and tons of warm-fuzzies.  Although Seg was the one newly coming to terms with his sexuality, he was the one keeping Roan grounded.  This book can be read as a standalone but if you’ve read the other books in the Pier 70 series you know Roan can really over think things and gets in his own head too much.  Seg always seemed to know when that was happening and would stop Roan from spiraling.

I don’t think it’s giving away too much by saying Seg is fully in the closet when this story starts.  Eventually he comes out to his mom and it is such a beautiful scene.  I cried when he finally said the words “I’m gay”.  Not because of some sweeping and grand reaction from his mom or because there is any heartbreak in his revelation.  Aside from the nerves you can feel coming from Seg right off the pages, the scene is so understated and the reactions so subtle it’s just real and beautiful and true.  Then there is a scene between Seg and Phoenix where Seg discusses what his sexuality will mean when it comes to his job as a professional hockey player.  Such an important point is made in that conversation.  Again, I don’t want to give away too much so just know I loved what Phoenix has to say on the subject.

More than a story of love, this is a story of family.  What makes a family?  Is it blood or bond or both?  You can’t deny that Roan and his friends are a true family.  That was very evident in the events of Speechless and even more so here.  They will band together and protect their own no matter what.  Even when Roan thinks he doesn’t need or want their help or that it somehow makes him weak, they don’t back down.  Friends who are like family really know you better than anyone and can see things in your life that you may overlook.

There is a point in this story that I feel so much hatred toward Seg.  The author makes a genius move in having Cam confront Roan about his feelings about Seg and his own actions and reactions to the situation.  Not only did it bring Roan down to a more rational state, it also helped me to think of things from a different angle.  I wasn’t willing to give Seg the benefit of the doubt until Cam brought up a few points about the incident.

Seriously, this is so hard to do without spoilers!  I want to reference another scene that not only had a huge impact on me but was also quite hilarious in its own way.  There is a conversation with Lydia, Roan’s step-mother, about what constitutes a “proper” parent.  It’s toward the end of the book so I can’t say much more than it blew me away.  Such a great conversation!  I love the reactions of everyone in that room throughout the whole scene.  Roan may have come out as a teenager and his dad may have accepted the revelation, but I don’t think Roan ever felt supported by his family.  Even before his step-mother came into the picture.  This scene is important in so many ways.

This is the last book in the Pier 70 series and Nicole Edwards really saved the best for last.  I could not put it down and I didn’t want it to end.  This book is really amazing!  Plus, she did an overhaul of the covers for the whole series and they are HOT!  If you haven’t read this series yet you must do so ASAP.  They can be read as standalones but they are all so good why not read the whole series?

Note: I finished this book on Thursday night and typed up my review on Friday morning to post on Monday.  It is now Sunday morning when I’m adding this note.  I cannot stop thinking about this book!  That is how great it is and that is how much it is sticking with me.  In fact, if I didn’t have so many books due at the library soon I would already be doing a re-read of this.  I never re-read a book right after I’m done with my first read.  It. Is. That. Good! 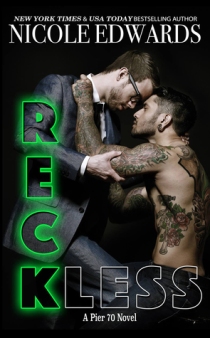 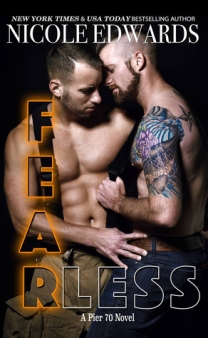 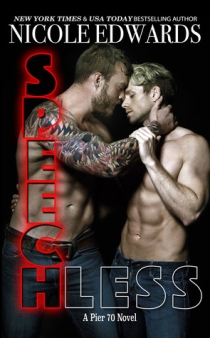 Couldn’t resist adding the new covers for the rest of the series to this post.  I told you, HOT!

I'm the mom of two boys and wife to my high school sweetheart. Our oldest, Josh, is living at home while working and paying off student loans. Our youngest, Griffin recently left his active duty Army job and is now National Guard here at home. He moved back to Michigan with his wife Kirsten and our beautiful granddaughter Hazel. I work part time and try to fit as much reading into my life as possible.
View all posts by Cheri →
This entry was posted in Book Reviews and tagged 5 stars, ARC, book blogger, book review, contemporary romance, Ethan, favorite couple, Fearless, Harmless, M/M, Nicole Edwards, Pier 70, Reckless, Speechless, sports romance, unforgettable books. Bookmark the permalink.