Fan the Flames (Search and Rescue) 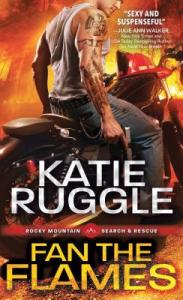 In the remote Rocky Mountains, lives depend on the Search & Rescue brotherhood. But in a place this far off the map, trust is hard to come by and secrets can be murder…

As a Motorcycle Club member and firefighter, Ian Walsh is used to riding the line between the good guys and the bad. He may owe the Club his life, but his heart rests with his fire station brothers…and with the girl he’s loved since they were kids, Rory Sorenson. Ian would do anything for Rory. He’d die for her. Kill for her. Defend her to his last breath-and he may just have to.

Every con in the Rockies knows Rory is the go-to girl for less-than-legal firearms, and for the past few years, she’s managed to keep the peace between dangerous factions by remaining strictly neutral. But when she defends herself against a brutal attack, Rory finds herself catapulted into the center of a Motorcycle Club war-with only Ian standing between her and a threat greater than either of them could have imagined.

As much as I was looking forward to Ian’s story and really love him from the previous books, his story didn’t end up pulling me in quite the same way as the first couple books in this series (and other Katie Ruggle stories I’ve read).  I still really enjoyed the book and I think the love story is amazingly sweet.

Rory grew up totally sheltered.  She’s in her mid-20s and has never had any friends in the traditional sense.  Her parents always stressed the importance of being prepared for the worst.  They home schooled her in a bubble, no interactions with even other home-schooled kids.  Since they own a store, that was her interaction with society.  Since it is a gun store, it was never with kids her own age.  Needless to say, Rory is extremely socially awkward.  She’s never sure if she’s saying the wrong thing, reacting the wrong way, taking a joke the wrong way, any of that.  She’s still a very wonderful person.  Even if she does sell some of her guns illegally, she has a surprisingly accurate moral compass.  (To be honesty, I wasn’t sure if I’d like her due to her arms dealing ways.  Stick with her and you’ll understand her pretty quickly.)

Because Ian has always been attached to the local motorcycle club, first through his dad and then through his step-dad, he’s been in Rory’s shop many times and even seen her around town once or twice when she needed supplies.  And he’s always felt a pull toward her, as well as an innate protectiveness when it came to her.  Since Rory has been so sheltered, she’s not quite sure how to take Ian’s protectiveness when things start getting sketchy around her shop.

Rory’s innocence in the relationship department keeps the love story between her and Ian at a slow build.  She may be well into adulthood, but Ian is an understanding guy and realizes quite quickly she will not be on the same timeline as other women her age.  He doesn’t coddle her, but he’s patient and understanding and it’s so swoony!  Her desires and insecurity about how to act (or not act) on those feelings, along with Ian’s consideration are what make their romance so achingly sweet…in a good way.

I believe the reason I wasn’t quite as invested in this story is there seemed to be a lot of the same things happening over and over, but not in different ways.  Like I already said, I still enjoyed this book.  It just had a bit too much filler that bogged it down that kept me from staying fully immersed in the story.  This will not, in any way, deter me from continuing to read this author and this series.  She’s definitely good and consistent enough that I can forgive a *gasp* 3 star story from her once in a while.  And it’s even higher than that!

I'm the mom of two boys and wife to my high school sweetheart. Our oldest, Josh, is living at home while working and paying off student loans. Our youngest, Griffin recently left his active duty Army job and is now National Guard here at home. He moved back to Michigan with his wife Kirsten and our beautiful granddaughter Hazel. I work part time and try to fit as much reading into my life as possible.
View all posts by Cheri →
This entry was posted in Book Reviews and tagged 3.5 stars, book blogger, book review, Fan the Flames, Katie Ruggle, M/F, paperback, R, romantic suspense, Search and Rescue, Sourcebooks Casablanca, Warren Public Library. Bookmark the permalink.

2 Responses to Fan the Flames (Search and Rescue)