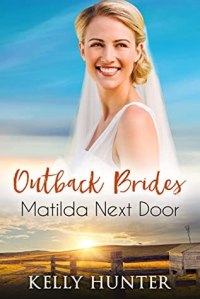 Aussie farm girl Matilda Moore kicks off her dream trip to London by flat-sitting for her childhood friend. But London is daunting, crowded and noisy, and that’s before Tilly finds a baby on the doorstep. There’s a note attached: “Henry, if you’re reading this, please know the worst has happened.”

Probability expert Henry Church has finally returned home to Wirralong, Australia, to see his grandparents when he gets a phone call from Tilly that breaks every statistical analysis. The probability of him being the father is marginal. Plus, he knows nothing about caring for a baby. Emotions and socializing are even bigger mysteries. He begs Tilly for help—can she cut her holiday short and bring the baby to Wirralong?

Tilly will do almost anything for her childhood best friend, but falling in love with him and his motherless baby is an emphatic no. Out of the question. Or is it?

I found this story to be a quick read with lots of warm-fuzzies. Kelly Hunter is a new-to-me author and, to be honest, I almost passed on this one due to timing issues. But I am a sucker for friends to lovers, and then you throw in a baby-on-the-doorstep element, I just can’t resist.

Even before baby Rowan shows up, Tilly and Henry have a chemistry that cannot be denied. And that was mostly via video chat! For the small bit of time Henry and Tilly are in the same space in the very beginning of this book, I really wasn’t sure how the author would find a groove with them. I felt a small spark, but wasn’t convinced.  Then I spent the rest of the book with butterflies for these two people that obviously were meant to be together. There conversations when they were thousands of miles apart just melted me.

As outgoing as Tilly is, she never really let people know the real her. If she was hurt by their words or actions, she didn’t speak up but instead pasted on her congenial smile. Henry always saw right through her act, even as a child. While they have barely seen one another over the last 10 or so years, Henry finds Tilly is still the people pleaser she always was.

Henry is a tough nut to crack. He is very stoic and literal. He finds order in his life to be calming. It may not make him happy, but it also doesn’t make him sad. While most people around Henry, including those that raised him, think his serious demeanor translates to him not knowing how to love, Tilly knows this isn’t true. She sees the young boy inside of Henry who was ignored by his mom and verbally berated by his grandmother, and knows his quiet ways are a defense. Henry broke my heart into a million pieces more than once. That man has been through it in his life and deserves all the happiness and joy Tilly can bring to him.

One of the things I loved about this story is Tilly’s understanding. She has quite a few bouts of insecurities when it comes to the relationship she begins to build with Henry. It’s really no fault of his, either. And Tilly gets that. She gets that Henry doesn’t know how to open up because he was never taught to speak his mind…his hopes, and fears, and dreams. So instead of going off half-cocked in anger, jealousy, or defeat, Tilly thinks things through first. Henry, in his own way, does the same. These two might not always talk to each other when they should, but they do eventually talk and work things out.

This series is one of those where each book is written by a different author. It has a great start with this story and I’m hoping the rest can live up to the standards that are now set.

**I received an ARC of this book courtesy of the publisher. All opinions expressed in this review are my own and given freely**

I'm the mom of two boys and wife to my high school sweetheart. Our oldest, Josh, is living at home while working and paying off student loans. Our youngest, Griffin recently left his active duty Army job and is now National Guard here at home. He moved back to Michigan with his wife Kirsten and our beautiful granddaughter Hazel. I work part time and try to fit as much reading into my life as possible.
View all posts by Cheri →
This entry was posted in Book Reviews and tagged 4.5 stars, ARC, book review, contemporary romance, friends to lovers, Kelly Hunter, Kindle, M/F, Matlida Next Door, must read, Outback Brides Return to Wirralong, R, Tule Publishing. Bookmark the permalink.