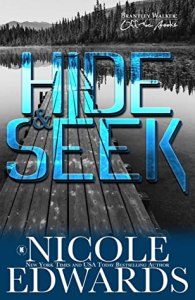 With the holidays nearing, Brantley Walker and Reese Tavoularis are getting settled, both personally and professionally. For Reese, dealing with Brantley’s about-face regarding the size of the task force is easy. It’s meeting the parents that he’s worried about.

On the work front, the Off the Books task force has a stack of cold cases that need to be tackled, but two new cases keep them moving across the great state of Texas. One of which turns into a dangerous game of hide and seek.

Can I love Brantley and Reese any more than I already do? It doesn’t seem like I should be able to, but they burrow deeper and deeper into my heart each time.  As with the first two books in this series, I didn’t want to stop turning pages. The chemistry and love between Reese and Brantley just melts me, and the rest of the story and characters add even more.

There is a lot of set up in this story. I’m not saying that’s a bad thing. I’m just letting you know that the crew is finally starting to get organized and figuring out how they want to run things in their task force. It may sound like that would be boring, but we get a lot of interaction between JJ and Baz and get to know Brantley’s brother, Trey, better. There’s also another surprise addition to the team who actually makes me fall for Reese even harder. He’s really a big softy at heart.

Speaking of Reese, that man intrigues me to no end. What the heck happened to him in the military? I want to know, but I’m also afraid for his story. I just know it’s going to gut me when we finally learn all the details. It’s funny how he has slowly become more comfortable with his feeling for Brantley when in mixed company, but he still holds so much inside. With Brantley’s love and patience (isn’t it great how impatient Brantley is with all things but Reese?) he will eventually find a way to talk about his military career. Reese is amazing with Brantley and his PTSD and migraines; I wish he could see he would get the same sensitivity back when he opens up to Brantley.

Like I said, there is a lot of set up in this story. A little more than halfway through, a big case hits the desk of the task force and the remainder of the story is go, go, go.  This is what they are meant to do, and they do it well. During this mission we see a sweetness blossoming between Baz and JJ, we see Trey gain confidence in his place on the team, and we are able to see the trust between Reese and Brantley grow. They have really learned to trust one another’s instincts.

One of the fun “day to day” type things in this story is Brantley and Reese dealing with family. The stress that comes with meeting the parents. The hope the siblings will like the significant other and the pride when they not only like them but take them into the fold. It’s really quite lovely.

I’m feeling quite spoiled with this series. The author has been keeping them coming pretty quickly and I don’t want that to stop. But I understand the characters speak when they want and these stories may not always come so quickly. I’m enjoying it while I can, though.

**I received an ARC of this book courtesy of the author. All opinions expressed in this review are my own and given freely**

I'm the mom of two boys and wife to my high school sweetheart. Our oldest, Josh, is living at home while working and paying off student loans. Our youngest, Griffin recently left his active duty Army job and is now National Guard here at home. He moved back to Michigan with his wife Kirsten and our beautiful granddaughter Hazel. I work part time and try to fit as much reading into my life as possible.
View all posts by Cheri →
This entry was posted in Book Reviews and tagged 4.5 stars, ARC, Brantley Walker, Hide & Seek, Kindle, M/F, M/M, must read, Nicole Edwards, Nicole Edwards Limited, Off the Books, romantic suspense, XXX. Bookmark the permalink.