When Your Kid is an Adult

It’s a strange thing when your child is away at college.  At least it is for me.  It’s like I’m his parent, yet I’m not.  I worry about him every day…is he eating healthy, is he happy, is he doing his homework, is he wearing a hat in the blizzard they are having?  All of these questions and more go through my mind constantly.  But there’s nothing I can do about any of them short of calling him every hour to check in.  I have a feeling he’d stop answering the phone 😉

These worries intensify when a tragedy happens, no matter if that tragedy is close to the child or far away.  On Monday, after the bombings in Boston, I just wanted to know he was okay.  The boy is more than 1200 miles from Boston.  I live much closer to Boston than he does.  But that’s how a mother’s mind works.  And because I try (so, so, so hard) to give him his space to “be an adult”, and because I know I’m being irrational, I don’t call him.  I send him a text.

Me:  You know I worry, can you please just tell me you’re alive?  After everything that is going on in Boston I just need to know you’re okay!

So what about the above exchange was NOT overreacting?  Nothing.  I try so hard to be relaxed and not stress over this stuff.  Honestly, how was he supposed to know I was freaking out?  That is not conveyed by a text message.  He probably saw it and was busy and thought he’d just text me back later.  Of course, I’m having a mini nervous breakdown 500 miles away.  So I end up freaking out on him anyway.

This is the kind of big hug I wanted to give him but couldn’t:

dropping Josh off at college and saying goodbye

While I was watching the coverage of the search for the remaining suspect yesterday, I couldn’t help but feel for the parents who had sent their kids off to college in Boston.  Wow, what a great bunch of universities they have in that area.  I’m sure they attract bright young people from all over the country as well as the world.  What a helpless feeling they must have had to watch things unfold on television when all they wanted to do was give their child a hug.  And as grown up as college kids want to be and want us to believe them to be, I’m sure there were plenty of them sitting in their dorms or apartments that just wanted to be with their mom and/or dad.

As I prayed for the whole area, I was sending tons of love and support to those parents and college students.  To the parents who dropped their young child off at daycare before the directive to stay off the streets.  Being so close yet so far from hugging that child.  To the parents who were still home with their children and trying to keep them from seeing too much on television, but also somehow keep them from looking out the window and seeing the police, military and other government agencies out there on their front lawn.  As adults we know they are out there to protect us but it still looks scary, imagine how scary it must look to a 5-year-old.

I rejoice that they were able to apprehend the suspect and the people of Boston were able to sleep with both eyes closed last night.  My hat’s off to all of the people who did such a wonderful job of keeping our country safe.

So, on a lighter note and to end this post on a high note…I saw this on Facebook and it really made me giggle after my last post about the weather.  This sure sums it up around here.  It snowed last night! 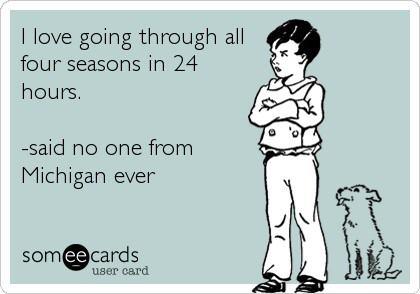 Have a great weekend!

I'm the mom of two boys and wife to my high school sweetheart. Our oldest, Josh, is living at home while working and paying off student loans. Our youngest, Griffin recently left his active duty Army job and is now National Guard here at home. He moved back to Michigan with his wife Kirsten and our beautiful granddaughter Hazel. I work part time and try to fit as much reading into my life as possible.
View all posts by Cheri →
This entry was posted in Procrastinators Progress and tagged Boston, family, growing up, motherhood, school, teenagers. Bookmark the permalink.

2 Responses to When Your Kid is an Adult